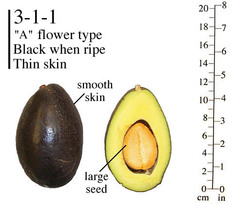 Mexicola Grande Avocado
My interest in Mexicola Grande Avocado comes from watching my Mexicola Tree doing very well in the grove. The Grande has the same anise smell typical of the Mexican Race. I have noticed that these trees attract more bees than any other tree in the grove, So a few of these can not hurt even just as bee race attracts ants. Kind of keeping the bee population happy.
They seem to start flowering very early and produce fruit early as well in So. Florida. I just going to report on growth and behavior in So. Florida. I'm not sure if anything can be done with the fruit here, I have never tasted one.
For some reason the University of California had this variety listed as 3-1-1

February 14, 2013: I top worked a tree in the grove from a tree I had in a container.
February 27, 2013: Seems like the grafts are taking well.
April 14, 2013: Seem like the tree grafts are growing fast.
January 21, 2014: Only one graft remains but its now thick and strong. Lost two to a summer storm.
May 26, 2014: This tree is growing very fast. It 2-3 fruits that are growing well. Definitely larger than the regular Mexicola. Looks like we'll get to taste it.
July 4, 2014: Seems like the Mexicola Grande fruit is indeed a lot larger. Is at least 2 1/2 times larger if not 3. I did not get a picture today but I will get one next to the regular Mexicola. It does not look like the above picture at all.
July 6, 2014: Stopped by the tree to get pictures of the Mexicola Grande next to a regular Mexicola that reached maturity and began to turn black.  The Mexicola Grande seem to have some more time to go, this is good maturity at different times.
July 29, 2014: Mexicola Grande are beginning to turn dark. Will pick one in the next 4-5 days.
August 7, 2014: The fruits were like 80% dark. I picked two and left another two in the tree to see how long they stay in the tree after they start turning dark.
August 14, 2014: Seven days went by I went to pick the other two Mexicola Grande and they were on the ground. Apparently once they turn dark they drop. Out  of the two I picked August 7, I tried one, it was too hard with a taste I did not like. Tasted like smoked avocado, if you can imagine such a thing.
October 29, 2014: I saw some fully open flowers on this tree today not a lot but in one branch.
November 8, 2014: The tree is not in a full bloom. It is just opening selective flowers in diferent areas. Does not seem like it has a uniform bloom.
June 16, 2016: The Mexicola Grande is on its second flowering. Due to temperatures fluctuation in the area it flowered at different time. Is holding a decent amount of fruit in the 8 oz range beginning to ripen now, its a bit later than the regular Mexicola